Tissue Donation as a gift for life

Stuttgart/Kiel/Brasov, 23 August 2021 – On Friday, 13 August 2021, a 16-year-old boy in Romania received an urgently needed heart valve from Germany. Two specialists from Sana Cardiac Surgery Clinic Stuttgart travelled to the hospital Spitalul Sf. Constantin, located in Brasov, to perform the demanding operation together with the Romanian team. The transplant, a donor tissue from the network of the German Society for Tissue Transplantation (DGFG), had to be delivered quickly: Within 24 hours, the heart valve from the tissue bank in Kiel had to reach the hospital in Brasov for implantation. This tremendous logistical task was only possible with the combined efforts of everyone involved, and in the end, it was a complete success: The surgeons were satisfied with the result of the implantation. Now, the boy has the chance of a fresh start with a bright future. The project was coordinated and financially supported by the support association kinderherzen.

“I just want to do normal things again, like play with my friends” wishes Silviu Lavrig (16 years) shortly before the operation last Friday morning. Silviu suffers from congenital aortic valve stenosis and associated severe heart failure. He underwent his first heart surgery at the age of 19 months. Today, almost 14 years later, he needs a new heart valve. In the past six months, his condition has deteriorated drastically, says his mother Elena, who was traveling with him for his transplantation: “He became much weaker. At last, he could only lie in bed.”

The demanding surgery presented a financial as well as a medical challenge. The family could not have afforded the surgery – and the local doctors lack clinical know-how and donor tissue. So kinderherzen was asked to help. Most recently, in May, a large team of specialists from Sana Cardiac Surgery Clinic was deployed for some surgeries in Romania. But this project was different: medical expertise as well as a suitable heart valve was needed. To organise this urgently needed transplant, kinderherzen approached the non-profit DGFG, which is the largest tissue donation network in Germany. The Sana Heart Surgery Clinic from Stuttgart also supports the DGFG in the donation of corneas, heart valves and blood vessels.

“It was immediately clear that we wanted to help this boy. It was an emergency. We put him on our waiting list and were quickly able to find a suitable donor tissue for him,” says Martin Börgel, managing director of DGFG. “kinderherzen is involved in Romania because there is a significant shortage of specialists there. Only 400 of the 1,500 children born with heart disease each year can be treated. Silviu could also have been transported to Germany for this transplantation, but we decided to help locally to enable the transfer of knowledge. kinderherzen is committed to sustainable humanitarian work in the countries of operation and to helping people help themselves,” says Bryan Kolarczyk, spokesman for kinderherzen. Together with two specialists from Sana Cardiac Surgery Clinic in Stuttgart, MD Vladimir Voth (senior physician and heart surgeon) and Pavel Heghi (cardio technician), clinic director Professor Victor Costache (Spitalul Sf. Constantin) performed a so-called Ross operation – a first in Brasov, according to Prof. Costache even in all of Romania.

After almost four and a half hours in the operating room came the first sigh of relief: the demanding transplantation was a success. Silviu was already conscious again the next morning. MD Voth expressed his confidence to mother and son: “They should not worry. In three months, he will be able to play soccer like he used to.”

Heghi and MD Voth carried out this mission on a voluntary basis during their vacation. For both this trip was a matter of heart in both senses. The Polisano Fundatia Foundation from Sibiu, founded by Prof. Costache, also provided support in organising the transplantation in Brasov: “There is no infrastructure for tissue donation and transplantation in Romania. With projects like this, we want to change that in the long term and continue to learn from our German colleagues,” affirmed Prof. Costache and expressed his gratitude on behalf of the entire team for the sacrificial help. The Sana Cardiac Surgery team and the DGFG now want to build on this success. “Without tissue donation, we would not be able to perform procedures such as the Ross operation, which is a great source of hope for young patients in particular – neither in Germany nor in Romania. Should we succeed, together with the DGFG, in further expanding heart valve donation, we could help even more patients,” says MD Voth.

The transplanted heart valve comes from post-mortem tissue donation. Heart valve donation is possible up to 36 hours after death. The collection and procurement were done by the DGFG in Germany. Unlike organs, tissues such as heart valves are not transplanted immediately, but are prepared in tissue banks, including the heart valve for Silviu. The transport of the tissue already started on last Thursday with the pickup from the heart valve bank of the DGFG in Kiel. From there it went via a courier to the Hamburg airport. Everything went according to plan and the operation could start on time on Friday noon in Brasov. Now the heart valve, donated by a deceased person in Germany, lives on in Silviu’s heart – beat for beat. 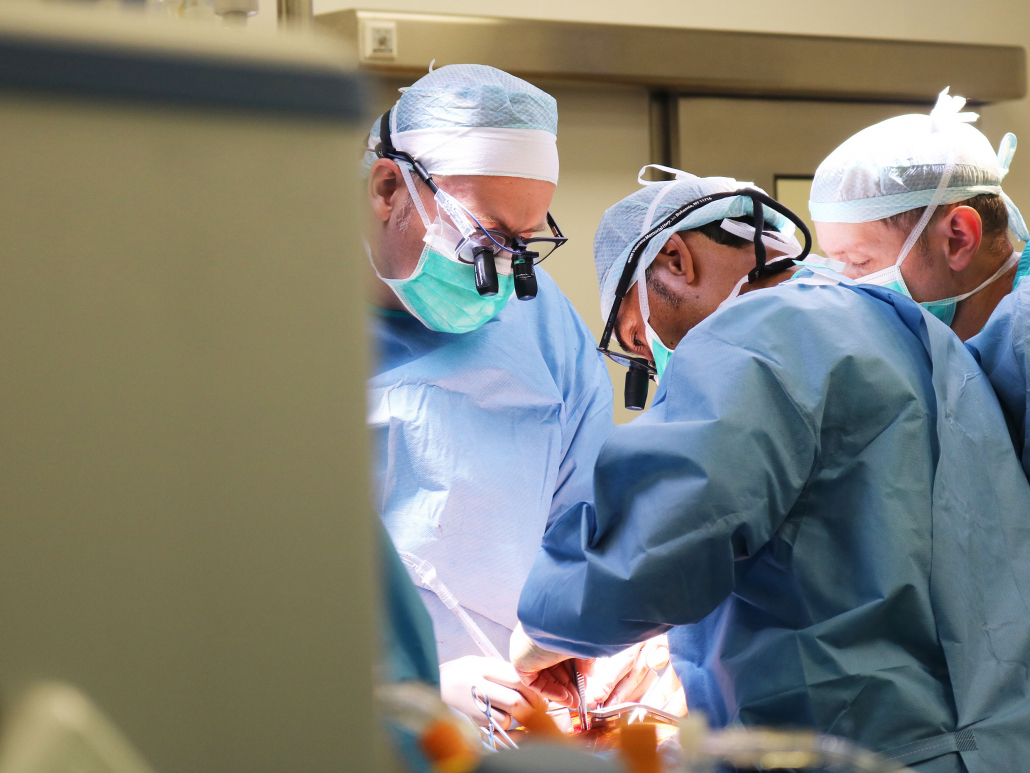 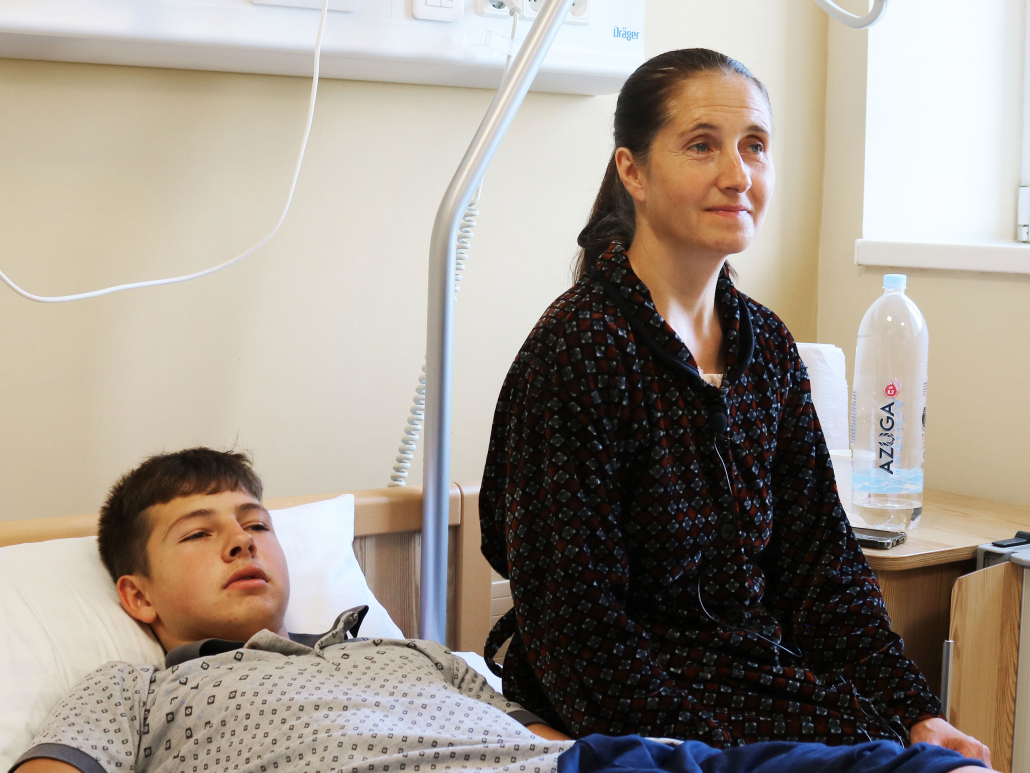 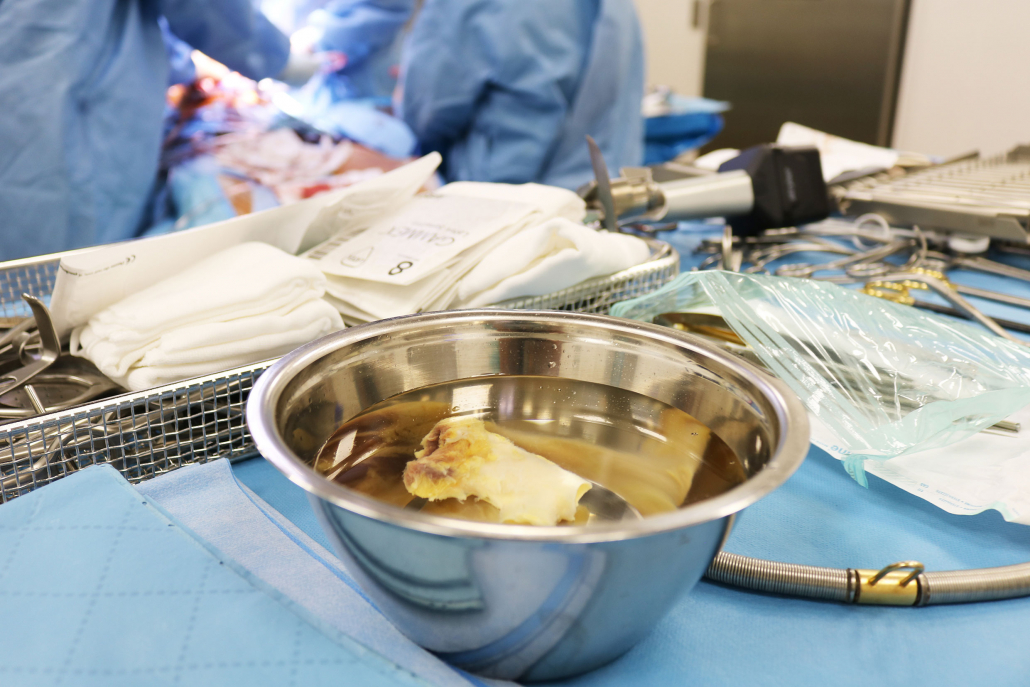 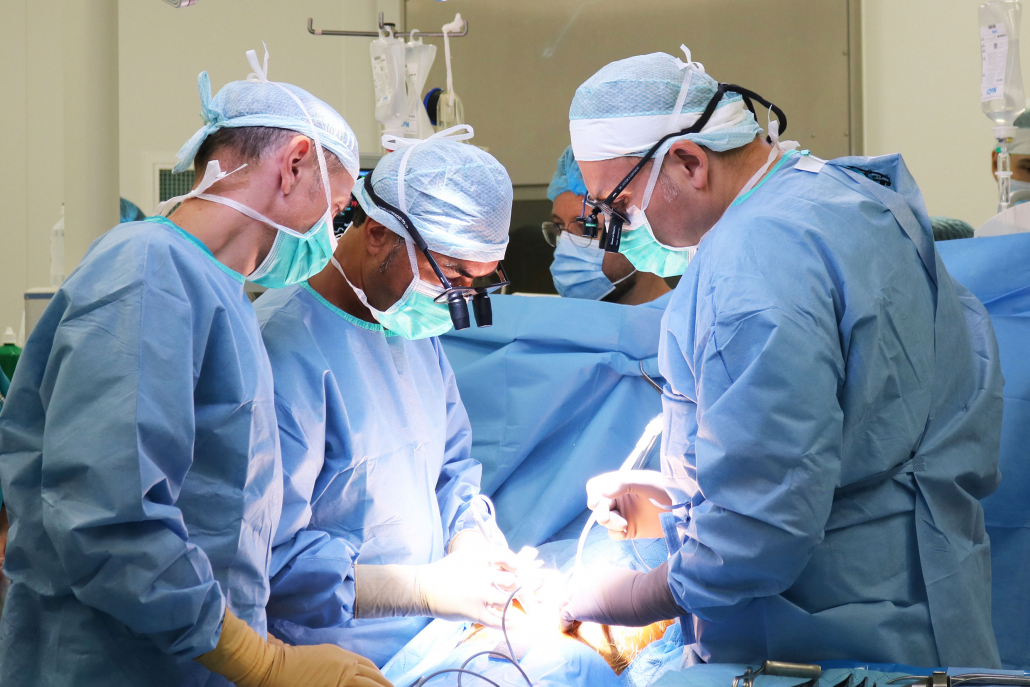 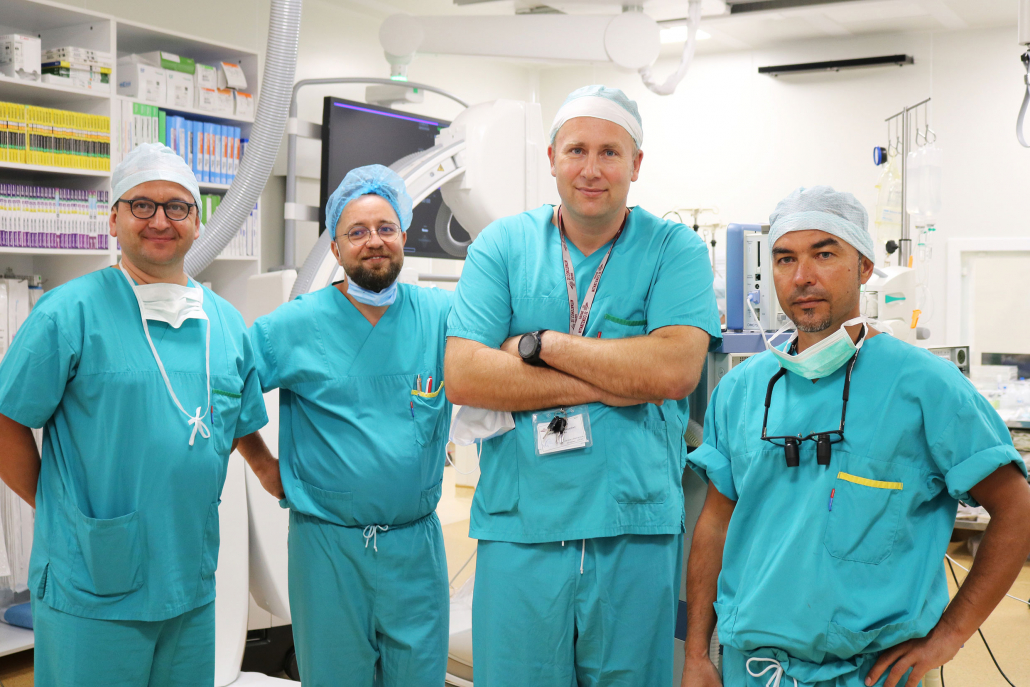 One in 100 children starts life with a heart condition. kinderherzen has been at their side for over 30 years. The support association explores new avenues in pediatric cardiac medicine and provides modern technology and therapies in clinics throughout Germany – so that young heart patients can be treated gently and painlessly. Their help knows no boundaries: For children with heart disease in medically underserved countries, the operations are often the only chance. kinderherzen not only saves the lives of children with heart disease but gives them the prospect of the best possible life.

With 66 beds, 5 operating rooms, including a state-of-the-art hybrid operating theatre, and over 2,000 heart operations per year, Sana Cardiac Surgery Clinic Stuttgart is one of the designated high-performance centres and specialists for cardiac medicine in Germany. Our treatment spectrum covers all cardiac surgical treatments from general medicine to special operations and for all ages from newborns to patients over 90 years of age. Our motto “care with heart” is at the forefront. As an academic teaching hospital of the University of Tübingen, research and the training of young doctors are close to our hearts.

The DGFG has been promoting tissue donation and transplantation in Germany since 1997. Based on the Tissue Act of 2007, all activities and processes of tissue donation are regulated. The trade ban applies to all tissue preparations. The DGFG arranges its transplants via a central allocation office with a nationwide waiting list. Every medical institution in Germany can request tissue from the DGFG. As an independent, non-profit organisation, the DGFG is supported exclusively by public health care institutions: its shareholders are the University Hospital Carl Gustav Carus Dresden, the University Hospital of Leipzig, the Hanover Medical School, the Rostock University Medical Center, and the Dietrich-Bonhoeffer Clinic Neubrandenburg. The DGFG is unique in Germany in its organisational structure, the voluntary nature of its support by network partners and its independence from private or commercial interests.

There are many ways to support the work of the DGFG. 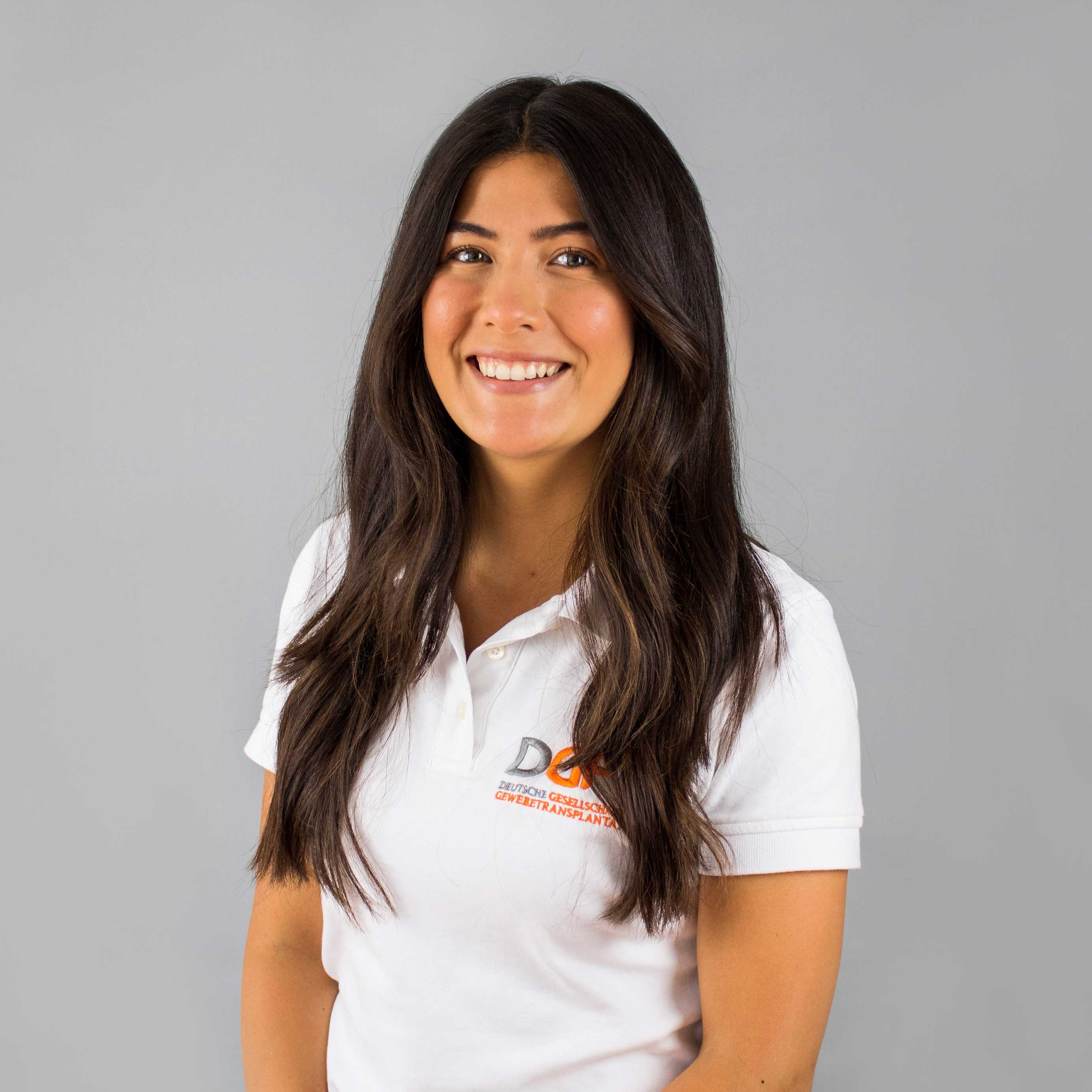 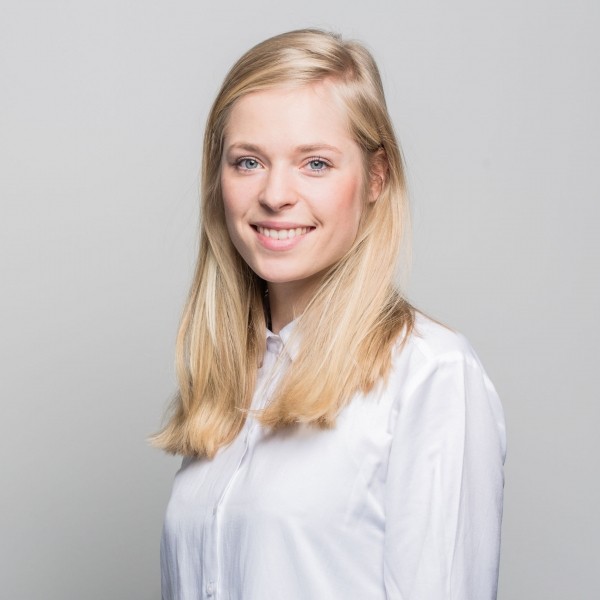